On June 15, 2020, LUMCON three scientific divers operating from a 16′ inflatable dive boat launched from R/V Point Sur in the waters off Gulfport, Mississippi, dropped over the side and slowly descended into the pitch black water to 65fsw. The mission was to locate and retrieve a piece of oceanographic equipment deployed by researchers from Office of Naval Research, Stennis Space Center left stranded on the bottom due to Covid -19 restrictions put in place in March, and in danger of losing all battery power in the coming days.

Fortunately the researchers aboard R/V Point Sur were still able to electronically ping the device and signal it to deploy a surface buoy allowing the divers to follow a line down to the bottom. With surface currents of 3-4 knots the divers worked to get below the top 15-20′ where they emerged into a realm of perpetual twilight. Meter by meter the low levels of light slipped away until eventually the only light was from the small dive flashlights. On the bottom, the fine silt exploded into the water column with every misplaced fin kick until the entire work area was filled with suspended particles of mud.

Eventually, the 300-400 pound piece of was located and the work began by feel to first locate a sensing plate buried in the adjacent bottom and dig it out. That accomplished the plate lifted up and tied to the top of the large piece of equipment. Next, the area around the device was carefully searched to confirm that no entangling lines or nets fouled it which might prevent it from being lifted from the bottom. And finally the lifting shackle was carefully inspected for corrosion and secure attachment confirmed.

Once all that was accomplished the signal was given and all divers carefully rose from the bottom and conducted a safety stop for three minutes at 20fsw. A surface marker was deployed by the divers to let the launch operator know to prepare to receive the divers back onboard. Minutes later all divers were recovered and the R/V Point Sur using the ships winch capabilities lifted the heavy oceanographic sensor device to the deck of the vessel. 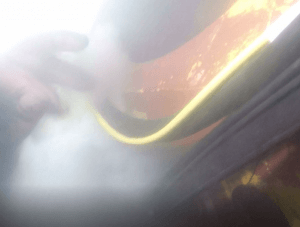 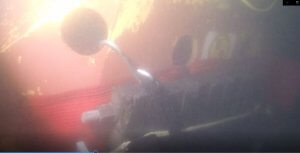